Have you ever stopped to question why you want (or wanted) a baby so much?

Do you find the question shocking? Taboo even?

Well, I didn’t question it. And because I avoided this level of deep introspection, I failed to realise that I spent fifteen years of my life chasing a dream based partly on the premise that someone or something would make me feel fulfilled, content, satisfied, real, right, good… I thought a baby, a family, a home, what Zorba the Greek calls ‘the full catastrophe’ – was going to make me feel whole dammit! Yes, I loved my then-husband insanely-much and the idea of a little bundle of our combined DNA made me go weak at the knees, but there was more going on than that…

But god forbid anyone who tried to tell me!  I just didn’t want to know. Stuck my fingers in my ears and sang la la la. I stayed in the tunnel and put off thinking about ‘why’ I’d chosen to make the nuclear family my own personal holy grail. Refused to accept ‘what is’, as Bert Hellinger says.

Yes, I believed there was a biological clock, and boy did it tick.  But would I really have heard it quite so loudly had I been listening to my soul instead?

What would things have been like for me if instead of neglecting my dreams, my passions, my friends, my work, my finances (and, quite often, my common sense) during that time I’d focused on creating a life without children, whilst still remaining open and excited about the possibility that one day I might become a mother? Why did I get stuck on this one outcome, mostly out of my control, rather than take a saner, broader view of things?

Well here’s the thing: because, even as the facts continued to pile up against me, the fantasy endured.  And let’s face it, as a woman with long-term unexplained infertility issues, just out of the wreckage of sixteen-year marriage and watching 40 recede gently in the rear-view mirror, things were not all that promising in the maternity stakes!

But no. Common sense is no match for denial.  And if a bit of reality ever did threaten to break through, my girlfriends usually closed it down fast with a quick, “Don’t worry. You’ll be OK. Stay positive! You’ll meet the right man / have IVF / get pregnant without even realizing it”… etc, etc. And then there were the miracle baby stories… at least I had company in my denial – some of these stories made the stork sounds positively rational!  It seemed that collectively, none of my female friends wanted me to face up to my situation.

When I started to break the taboo and began talking about the possibility that it might not work out for me, that I might not have children, it was as if I’d let off a fart bomb… women took a step back.  Somehow, my honesty stank, as if my fate, my childlessness, might actually be catching…

These days, having fully come to terms with the fact that I’ll never have a child, I can see that one of the reasons I didn’t even want to entertain the possibility that I might not have a family was that it would also have meant facing up to an absence of a viable ‘Plan B‘.  I’d stopped dreaming my life into being. The words of a friend who was one of the first of our ‘gang’ to have a baby (how nostalgic that sounds to me in 2020 – that ‘gang’ has long since been lost to the #FriendshipApocalypse of childlessness!) used to ring in my ear, when she said: “Since I had her, I don’t have to wonder what my life’s about anymore.”  That sounded pretty good to me; an existential get-out-of-jail-free card.  These days, I’m not so sure she’s right, and I imagine that perhaps in another decade or so when the children have all grown up, she, and other parents, may find that such thoughts are waiting for them on the other side.*(2020 note; I was spot on there).

With the benefit of hindsight, I can see that I got very vague about my life goals in my 30s as a response to my ex-husband’s sad spiral down into addiction – and that I chose to blame some of that unhappiness and confusion on my biological clock.  Somehow, because I couldn’t look into the future and see, with certainty, that I would be a mother (living with an addict, you can’t predict what’s going to happen by teatime) I decided I had a 100% cast-iron guaranteed reason to ditz around in my life and wait for a baby to come and clear this whole mess up.  I took my foot off the gas. I got lost.

Now, at 47 *(55 in 2020!) and having made peace with my destiny and got back into the driving seat of my life, I often meet single women around the age of 40, still hopeful of having a family, and yet strangely unwilling to talk about their own dreams, their own lives.  Intelligent, educated, hard-working, emotionally intelligent women – yet they seem to be living like wombs-in-waiting – a vacancy where their ambition and passion used to be.  Now, I’m not for a minute saying that wanting to be a mother is NOT an ambition, not a dream… but where has the rest of them gone?

I wonder if these women feel, unconsciously, that allowing themselves to dream their non-family related dreams is somehow going to put the kibosh on having a family?

But ask yourself this, if you were looking for a partner and you met a single, vibrant woman in her late-30s following her passion for taming sloths, writing poetry, singing, designing mazes, running for office, meditation, raising hawks, rescuing dogs, car-boot sales, running marathons, keeping bees, sky-diving, blogging, tap-dancing, saving the planet, coding, writing detective fiction, growing petunias, fencing or thrash metal… wouldn’t you prefer to spend an evening with her than with a falsely-cheerful, dolled-up ‘date’ who drinks ever-so-slightly too quickly and needs to know your views on starting a family by the second date?

There’s nothing as attractive as someone who respects their dreams enough to follow them.  Children are indeed a blessing, but they are here to fulfill their dreams, not ours.

Gateway Women hosts a vibrant private community over on MightyNetworks for permanently involuntarily childless women which includes many ‘Solo’ Gateway Women supporting each other as they refind their mojo in a world gone motherhood (and partnerhood!) crazy (what Bella dePaulo defines as ‘matrimania’). We also have our transformational healing workshop for single, childless women, the Solo Reignite Weekend, which happens annually on the weekend closest to Valentines – for Feb 2020 it’s the weekend of 15/16th February. I also write more fully about the disenfranchised grief of being both single AND childless in the new edition of my book, “Living the Life Unexpected” which is published on March 19th and available for pre-order here. 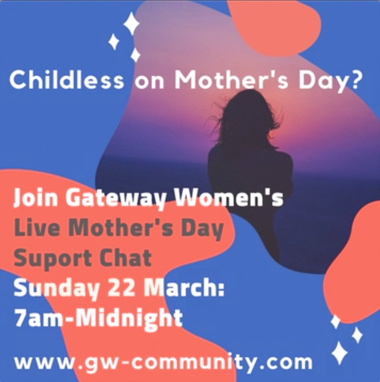